Ten of Application Security industry's coolest, most interesting, important, and entertaining links from the past week -- in no particular order.
Posted by Jeremiah Grossman at 12:28 PM No comments:

For those attending RSA Conference 2010 (San Francisco / March 1 – 5) and want to mingle with fellow Web application security people, the Web Application Security Consortium (WASC) luncheon is the place to be. Free drinks and appetizers will be served (sponsored by WhiteHat Security). WASC meet-ups are rare opportunities to shake hands with like minded people we only otherwise communicate with virtually. We'll shoot some pool, chit chat, and generally have a good time with people of similar security interests. Everyone is welcome, but remember the space at Jillan's is extremely limited ( RSVP quickly if you want to get in.

To attend please go directly to Jillian's to check-in with WhiteHat staff and then you will be granted access to the party.

Posted by Jeremiah Grossman at 9:40 AM No comments:

Posted by Jeremiah Grossman at 1:49 PM No comments:

Posted by Jeremiah Grossman at 1:46 PM No comments:

Everyone is giving their $0.02 on the Google v. China situation, and while I normally shy away from blogging about late breaking news, a term Richard Bejtlich used really resonated with me. "Advanced Persistent Threat" (APT). Doesn’t that just capture the essence of the type of attacker we’re up against perfectly? An attacker utilizing 0-day vulnerabilites, spear phishing tactics, one-off malware, and with little time, money, or legal constraints. Now, not all people or organizations using web-based systems are going to be the targets of APTs, but clearly some will be.

Lets broaden out our thinking beyond Google, as the problem is larger than they are, to include other “free” web-based services such as Facebook, Yahoo, Twitter, Microsoft, etc. I believe there is no way the average user can be considered reasonably safe from an APT on these systems. To be fair, these providers make no such claim as they are only built to withstand the lowest-common-denominator of attacker -- not APTs. Since all potential victims are equidistant, practically speaking all it really takes is a username/password or a bit of malware for any online account to be compromised. A very low bar and clearly no amount of SSL, firewalls, Anti-Virus, or CAPTCHA technology is going to raise it.

Secondly, an APTs target is unlikely to have any idea when/if their online accounts are being attacked. The infrastructure is not theirs to monitor. Web-based systems have no real notion of intrusion detection (or even a delete key) unless you include those emails when your account is locked out or password is changed without your knowledge. Even more troubling, victims will not have any idea when/if the threat succeeded in their mission. Next, as if there was any question, these web-based system not legally or fiscally accountable for breaches -- whether it was their fault of not. And finally, APTs will not stop no matter who lays down the ultimatum.

When everything is taken into consideration, any user who believes they are going to be a target of an APT should not be using these systems for anything they can’t afford to lose control over. The fact that the U.S. government is moving their system in this direction really concerns me. Perhaps there is a silver lining. These events could be the stimulus required for a new breed of web-based services to rise up and differentiate based upon security and maybe willing to take on some liability.
Posted by Jeremiah Grossman at 11:18 AM 7 comments:

Every year the Web security community produces dozens of new hacking techniques documented in white papers, blog posts, magazine articles, mailing list emails, etc. Not to be confused with individual vulnerability instances brandishing CVE numbers, nor intrusions / incidents, but actual new methods of Web attack. Some techniques target websites, others Web browsers, and the rest somewhere in between. Historically much of this research would unfortunately end up in obscure corners of the Web and become long forgotten. Now it its fourth year the Top Ten Web Hacking Techniques list provides a centralized repository for this knowledge and recognize researchers contributing to the advancement of our industry. 2009 produced ~80 new attack techniques (see below).

The diversity, volume, and innovation of the research was impressive. Competition was as fierce as ever and the judges had their work cut out. Rich Mogull, Dinis Cruz, Chris Hoff, HD Moore, Billy Rios, Dan Kaminsky, Romain Gaucher, Steven Christey, Jeff Forristal, and Michal Zalewski were tasked with ranking the field based upon novelty, impact, and overall pervasiveness. For any researcher simply the act of creating something unique enough to appear on the list is itself an achievement. Today the polls are close, votes are in, and the top ten list has been finalized. Researchers making the cut can expect to receive praise amongst their peers and take their place amongst those from previous years (2006, 2007, 2008).

Top honors go to Alexander Sotirov, Marc Stevens, Jacob Appelbaum, Arjen Lenstra, David Molnar, Dag Arne Osvik, Benne de Weger for their work on “Creating a rogue CA certificate.” The judges were convinced by no small margin that this entry stood head and shoulders above the rest. The team will be awarded a free pass to attend the BlackHat USA Briefings 2010! (generously sponsored by Black Hat)

8. Our Favorite XSS Filters and how to Attack them
Eduardo Vela (sirdarckcat), David Lindsay (thornmaker)

Coming up at IT-Defense (Feb. 3 - 5) and RSA USA 2010 (Mar. 1 - 5) it will be my great honor to introduce each of the top ten during my “2010: A Web Hacking Odyssey” presentations. Each technique will be described in technical detail for how they work, what they can do, who they affect, and how best to defend against them. The opportunity provides a chance to get a closer look at the new attacks that could be used against us in the future.

Posted by Jeremiah Grossman at 11:46 AM 9 comments:

Posted by Jeremiah Grossman at 9:28 AM No comments:

In absense of a security strategy

From experience working with all manner of organizations there are a number of unique security strategies present in the industry. Since every business operates differently, perhaps there is no right or wrong approach. That is, as long as the approach is properly aligned with the goals of the business. If not, the end result will lead to failure and in my opinion represents one of the largest, if not the largest, challenges presently facing the industry. That along with “justification,” which is probably the same thing.

Here are the strategies I’ve managed to identify:

Incident Response (aka: public relations)
Ensure that the exact types of previous break-ins, that have also been publicly attributed to the organization, will (hopefully) never happen again. Organize a set of public relations talking points for media inquiry in case it does.

Compliance (aka: satisfy the checkbox)
Satisfy audit requirements for any/all applicable regulations where failure will result in significant business loss. Ignore the rest until they do. Decisions on whether a particular security safeguard is required should be left to the discretion of the on-site auditor, but only after appropriate organizational push back.

Risk Management (aka: control-based)
Implement minimum industry accepted best-practices controls that establish a defensible due diligence posture in the event of incident or public inquiry. Engage with a well-known security consultancy that may positively attest to your organizations adherence via a thorough risk assessment.

Business Continuity (aka: keep the boss happy)
Address any security issues that have previously inhibited managements ability to use email or view online adult entertainment. Other outstanding risks are considered secondary and should be revisited periodically by the security steering committee.

Competitive Advantage (aka: customer-based)
Obtain a list of essential security controls from key customers/prospects, competitor technical literature, and provide assurance to customers that these highest standards of due care have been implemented.

Obviously many of these descriptions are meant to be humors while still reflecting some resemblance of today's organizational reality. Most organization adopt more than a single strategy to form their own unique hybrid approach to information security.
Posted by Jeremiah Grossman at 4:09 PM 3 comments:

To disable IE8's XSS Filter or not?

Since this article was published, Major IE8 flaw makes 'safe' sites unsafe, I’ve fielded a number of inquiries asking for guidance. Should they follow Google’s lead and proactively disable IE8’s XSS Filter (X-XSS-Protection: 0) until a patch is made available or leave it enabled? Without getting into any technical detail, here are my thoughts on the matter:

If your organization is REALLY concerned about XSS attacks, is VERY confident the website in question is one of the very few completely free from XSS issues (as apparently Google is), and is prepared to fix any XSS issues that surface within DAYS -- then you may consider disabling the XSS Filter to reduce any remaining attack surface until a patch arrives.

On the other hand if you are like most who have XSS, or don't know if they do or not, then leave the XSS Filter alone to do its job -- give your IE8 users a fighting chance.
Posted by Jeremiah Grossman at 1:18 PM 10 comments:

With most of the work done by Bil Corry (@bilcorry), here is a solid first pass at creating a mapping between the newly released WASC's Threat Classification v2 and OWASP's Top Ten 2010 RC1. This should help those actively using one or both of use documents. 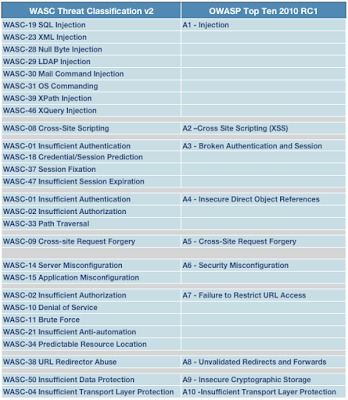 Posted by Jeremiah Grossman at 8:59 AM No comments: