I had some ideas of what Dubai would be like before going. I’d heard they had a lot of money and were building the country at an extremely fast pace. Well, let me tell you they weren’t kidding! The scale of what’s going on there is extremely difficult to describe. I’ll do my best to capture the opulence, glamour, and pride that seem to define all aspects of the country.

My first clue was the Dubai airport itself, which resembled a 5-star mall rather than a terminal. Everything was high-end and immaculate top to bottom. If you wanted something they probably had it somewhere in there, including a McArabia (flatbread and falafel) at the McDonalds. Any notion that you are smack dab in the middle of a desert is immediately shattered. That was until a brief moment where I stepped out of the cab at the hotel at experienced the heat. OMG.

The discomfort was short lived because the Sheraton Dubai Creek (HiTB venue) is a stunning hotel in every respect. I was whisked in by the doormen and immediately taken care of. Lavish rooms and extremely attentive staff were just the start. Parked outside my room window lining the Dubai Creek, great for morning walks, were about a dozen expensive looking yachts. I got to have a look around. 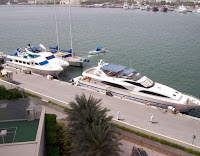 Spent the weekend walking around the city, including in some areas I probably should not have been in. All the locals were staring because I’m guessing I was on streets where tourists aren’t normally found. Or maybe because I look Pakistani and was dressed in american garb. Who knows. I mentioned it was HOT right? I don’t know what the mercury read, but I was concerned that my bright orange Phil Zimmerman fan boy shirt might spontaneously combust. Hawaii ain’t got nothing on this place when it comes to heat. Air conditioning is more for life support than comfort. 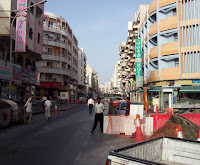 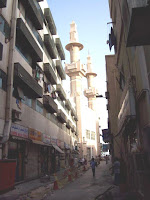 The picture is of me in front of the self-proclaimed worlds only 7-star hotel. I didn’t find the time to go in, but from what I’ve heard about it, it would be hard to disagree with their assessment. I mean they have a bay carved out so if you want to roll up in your yacht you can. Or maybe you have a helicopter that brought you from the airport so they have landing pad outcropping. Convenient. It’s quite clear that they exist at a whole other level in this place. Can this actually be sustained?

The beach was VERY nice, probably one the best outside of Hawaii I’ve been to. Bermuda was kick ass as well. Warm water (a little salty), white sand, and they even had heated showers - a first for me. To bad there aren’t any waves to be spoken of, but I wasn’t complaining. Getting a chance to chill and swim around in the ocean has been all too rare for me lately. I could have stayed for days. Dang, skimboarding would have been awesome. Next time.

One of the things I had to do was a desert safari. So I spent the latter half of a day bashing around the dunes in a 4x4 (WAY COOL), did a little light sandboarding, and finished the night in an encampment eating BBQ (Mmmmm), watching belly dancing, and puffing on a hookah (apple flavor). I even got the chance to ride a camel for a little while, interesting. :) Sometime during the night a few big black scorpions invaded the campsite and all the drivers scurried around trying to kill them. That added some excitement. I really enjoyed being out in the desert, it was quite and peaceful and something I’d definitely do again. 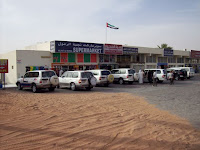 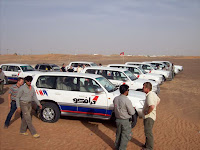 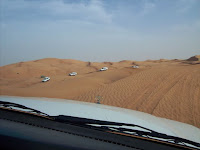 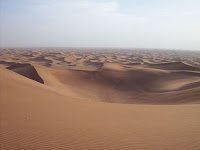 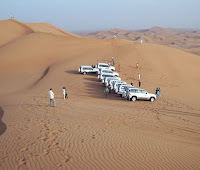 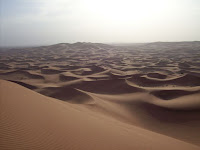 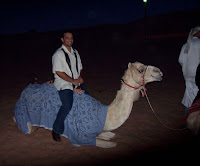 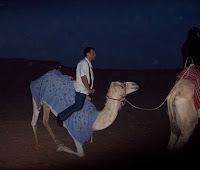 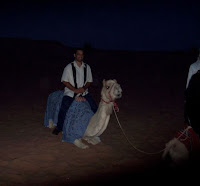 Before I talk about the Emirates Mall, let me tell about the freeway getting there. We’re talking an eight lane freeway in the middle of the desert lined by I kid you not, probably 50 new giant high rises simultaneously in construction. Then the cab driver says, “Oh by the way, the tallest building in the world just over there.” All I was thinking was the heck do you construct any building on top of SAND!? Before I forget, the cabbies over there drive crazy. If there were rules of the road, I couldn’t tell.

The Emirates Mall must have had every store and restaurant in there I have ever seen or heard about, including hotel every bit as nice as the one I stayed in built in. 3 levels, hundreds of stores, and even a gigantic indoor ski slope. I really wanted to give it a shot, but it appeared to be more like a kids thing and I just couldn’t bring myself to jump in and make a fool of myself. Something which I normally I have no problem doing. I’ll work up the courage for next time. 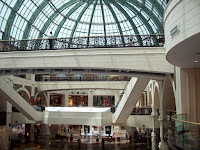 The best way I can describe Dubai to Americans is imagine Las Vegas, where money is ABSOLUTELY no object, and trying to be built by next year. It seems if Vegas is where Americans go to play, Dubai is where the Europeans go. I overheard so many different languages being spoken, no way I could even pick them out. Americans were few and far between. At the end though, I was ready to get out of there. It’s an amazing cool place to visit and spend a week.
Posted by Jeremiah Grossman at 9:04 AM

Very interesting report, nice photos too. I would like to experience that heat, since I enjoy Houston's so much.

interesting and it is great fun - you went for safari cruising...

Looks beautiful, I'm definitely looking for a slot next year. =]

Six months ago I would have condemned UAE for its record on human rights (http://www.hrw.org/english/docs/2006/01/18/uae12233.htm), despite the undeniable beauty of the place, but I'm starting to think America is, in many ways, just as bad if not worse.

Nice photos and good comments. Thanks. Didn't mention the food...fantastic!

I usually tell people it's like you're on the street level of Sim City.

Apparently there are traffic laws. If bump into someone you need to drive to the side of the road and stop until the police clears you ,otherwise you can't legally repair the car. I think I saw well over 10 bumps in the week I was there. Also you're now days supposed to use your blinkers when changing lanes.

My only complaint is that the sales people in stores don't seem all that interested in trying to service you. I never realized how nice it is to have people walk up to you and ask if you need help and put on a smile.