Update: Added a few pics below.

I've been a lot busier than normal the last week in preparation for a pair of Brazilian Jiu Jitsu (BJJ) tournaments. I took a few days off, let email/blog lapsed a bit, and visited a couple of cool BJJ/MMA academies in the L.A. area. I met some really famous fighters along the way as well. Rorion Gracie, Rener Gracie, Travis Lutter, Valid Ismael, etc.

Anyway, last weekend I entered a relatively small tournament in the blue belt unlimited (221.5+ lbs) division. This is where the monsters go to play. Now I’m 6’2” / 270lbs, not small by any measure, so I figured I’d be OK. Also I’m fairly inexperienced as compared to most blues in the competition who are 3-4 years in and I’m only a year. I like to compete just the same. To my utter astonishment, I was significantly outsized, being the small one of the bunch. I kid you not. The guy who beat me was about 320 lbs. I’m not used to being outweighed by 50lbs! And the guy who won was 343lbs. I couldn’t see the fight from my vantage point, face smashed into the mat, but I’m told I help my own fairly well. I could have won at a certain point, but didn’t capitalize. Ugh. A loss is a loss.

So this weekend I entered a really BIG tournament in the same division. Again, I was the small guy but more prepared and less butterflies. Another guy there was 6’6”, 310 lbs, and well built. Whoa. In my fight I was fairly evenly matched size wise, but I couldn’t take this guy off his feat. He was REALLY strong and my takedowns suck. He scored a takedown on me half way through, but I’m pretty good about getting back up quickly. No extra points. I didn’t get submitted, which is something to be proud of I guess, but again a loss is a loss.

I’ve never been one to get discourage, but its certainly frustrating. My tourney record (0-3) is pathetic and frankly I'm getting sick of getting my butt kicked. Both experience pointed out exactly what I have to do moving forward in my training. No better way to test your skills than to throw yourself into the fire.

1) Time to get out of this weight division. Taking the next 6-9 months to get below 221 and not compete until. This will make me a lot faster as well.

3) Work on my technique and build a lot more stamina. This is key.

We’ll see how the next year goes. 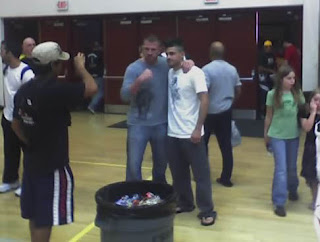 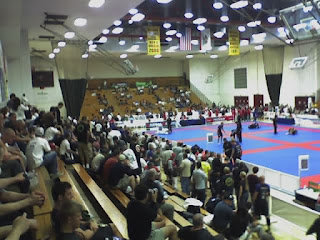 The view from the crowd 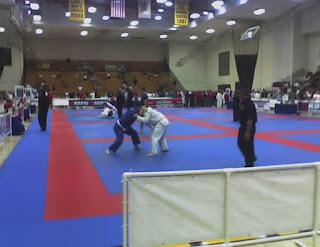 The view of a match from ground level
Posted by Jeremiah Grossman at 2:30 PM

343lbs!! Shit, that's big. I'm happy that I'm way down at 143lbs, so don't have to deal with scarily huge people like that (though I've only competed once: still in two minds about when to compete since I got the blue a few months back).