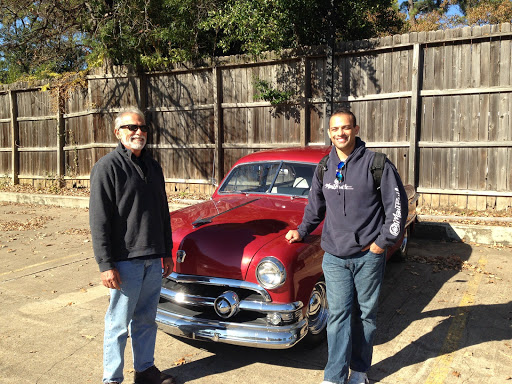 I wanted to get my dad a gift, but not just any gift. The perfect gift. For a diehard hot-rodder like my dad, there can only be one thing -- a car. Of course, not just any ol' thing with four wheels. He quite literally has 50 mostly junkers and clunkers already. Only THE DREAM CAR would do. What kind of car that was I really didn't know. I had to find out exactly, EXACTLY what that kind of car without letting my dad know and spoil the surprise. For this I asked my brother Zach for help. Discreetly, while both of them were watching a hotrod show on TV, Zach found out that dad's all-time favorite car is a 1951 Ford 2 door with the original flathead v8 engine. Score!

As the story goes, this is the very same car his dad, my grandfather, had bought for him at age 16 for $50. Cars have a way of making a lasting impression on people like this. True to the stereotypical ethnicity of our namesake, grandpa Hyman was worried that he might have overpaid. For reasons I still don’t know, my dad had never owned another like it since. We’re talking 50 years! This is extremely odd because over the years he’s owned essentially every other kind of car, having always been somehow connected to the car business. It probably had to do with their rarity, especially on Maui, as I came to find out to the hard way.

For months, and months, and months, Zach and I scoured Craigslist national wide and the whole rest of the Internet. We found only the trailer queen show cars selling for many tens of thousands, or on the other end of the spectrum, a pile of rusty incomplete junk. Neither option could be considered for our perfect gift. We wanted something in between. Something decent, or at least restorable, but the make and model had to be exactly right. Zach and I weren’t about to give up.

Finally, on Dec 30, 2013, a Craigslist listing came up in a place called Yantis, TX. Ever heard of it? We hadn’t either. It’s 2.5 hours East... yes... East of Dallas, TX. And remember, all of us live 4,000 miles away on the Hawaiian island of Maui. We had no idea how to get the car back to paradise. We’ll solve that problem later. Undeterred, I immediately called the seller asking if the car was available. It was! W00T! From the description, if the car was anything close to what was advertised, this was exactly what we were looking for. The price was right, perhaps even a deal. Zach and I were seriously excited! 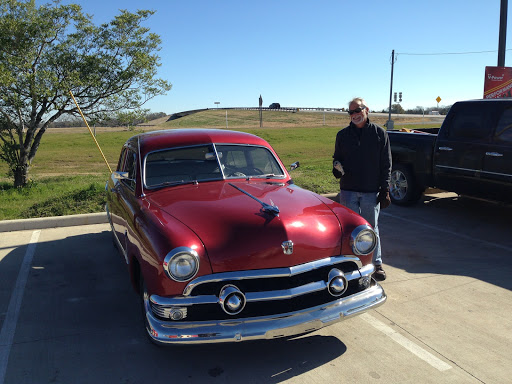 Next, Zach calls the seller to ask a bunch of questions to make 100% certain this was everything we wanted. It was. Our search was over. Well, sort of. 24 hours later, I call the seller prepared to pay the asking price, sight unseen. I said I'd fly out immediately to get if necessary. This was more than a little shocking to the seller. “Long drive,” he says to me after revealing where I live. The seller said he was a little uncomfortable allowing me to purchase the car sight unseen, especially since he doesn't know me and I'm so far away. He didn’t want me to be disappointed upon arrival and not buy it. Obviously, a really nice guy. He did say another interested party is coming to look at the car the following day, on New Year’s Day!

Uh, oh. At this point in the conversation, I'm extremely worried. This person might buy the car that was in my mind already MY DAD’s CAR! Who knows when I might get another chance like this?! I tried everything I could to lock in the deal over the phone, but to no avail. The seller assured me it’s more likely the other guy is just looking and won't buy it, and if they don't, it's mine. I'm asked to phone the next day to get my answer. Talk about a stressful waiting period. All I can do now is hope for the best and prepare for an immediate flight out to Dallas in case things go well.

Now, I there are two problems to sort out and less than a day to do it. 1) I have to convince my dad to take a short notice trip with me to Texas without letting him know the exact reason why. 2) The seller requires either cash in hand or a cashier’s check from a local Texas bank.

Fortunately, my dad is always up for an adventure. So, I said asked if he'd like to take a business trip with me to visit WhiteHat in both Santa Clara and Houston. He'd never really visited the company before to see what I built. It was a fortunate coincidence the car and a WhiteHat office was in Texas. He agreed.

Next, getting a sizable amount of cash over New Year’s Day, 4,000 miles away, when I bank at a local Hawaii bank that has no out of state branches, proved to be a far more significant challenge. Western Union and Money Orders would were of no use even if the locations were open at the time. Darn holidays! Their daily limits were too small for my current needs. FYI: The dollar amount here is less than an average new car off a lot, but still something you’d not want to carry around, let alone on a plane flight.

I call the seller the following day, he green lights the deal, and I’m overjoyed. I quickly buy some plane tickets, ouch on the short notice price, and let my dad know we're leaving in 5 hours. He was a little stunned I moved so quickly, and didn't think I was serious at first, but again... he's normally game for whatever. This time proved no different. 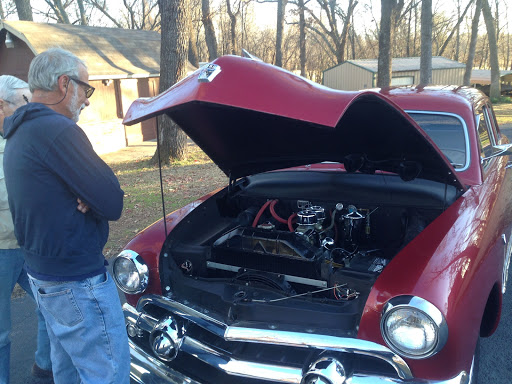 Note: I didn’t have a way to solve the cash problem, so was I no choice but to figure it out upon arrival in Dallas. And, we're gone, just like that.

A 7-hour red-eye flight later and we're in Dallas at 6am on Jan 2. Oh, did I mention it was friggin’ cold — like 35F. I can tolerate frigid temperature OK, but Dad's lived for 30 years in Maui and will wear sweaters when it dips below 70F. While he’s always up for an adventure, life and death circumstance and all that not being a problem, it just better not be cold. I can tell he's having second thoughts about this trip right when we step outside of the terminal. He quickly puts on every piece of clothing he packed.

We grab a rental car, check-in to a hotel, get a bite to eat, and head to the bank -- "to open a new bank account just in case”… of a zombie apocalypse is my cover story. Turns out the best way to get cash in a hurry, given my constraints, is calling your source bank, asking them to raise the daily limit on your debit account to whatever you need, and having the destination bank perform a cash advance. This essentially looks a typical debit card transaction, but instead of a 50in TV, you get cash. The process took some doing and some waiting, but I got it done. Whew!

I call the seller, tell him I'm in town and ready to go. He's quite surprised because in the same 12-hour period I'm in Maui and then in Texas. Hey, I move quick. I ask for directions. By now it's about 2pm and time to head out for a 2.5 hour drive to get the car. My dad still has no idea what I’m up to.

We start getting noticeably WAY out in the boonies, and we have no cell phone reception for miles. That’s when dad finally asks me, “Are we meeting someone out here for business?” I reply, “yes, we're meeting someone."

Then it happened, not 60 seconds later, I see the car, sitting perfectly out in an open driveway. It's red, shiny, gorgeously chromey, and at 1/4 mile away, completely unmistakable. 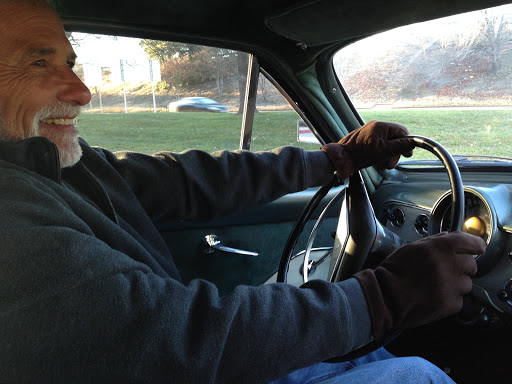 I slyly point the car out to dad, who doesn’t see it yet, and say inquisitively, "Hey, what's that car over there?" He squints and instantly says in a more than surprised, curious, and somehow measured tone, "That's... that's a 1951 Ford!"

“What!?” He exclaims, even more confused now than before.

“See that man coming out of the house over there, he’s expecting us. He's selling us that car today.

We're in the driveway now and dad gets out without a word, surveys the car at 10 feet, barely acknowledging the seller. Like a little boy again, he can’t take his eyes off the car. Clearly, it’s like it's a dream, and he can't believe he's actually seeing this car, his dream car, with his own eyes. Again, you never see these cars anywhere. He mutters, “Oh my God,” obviously overwhelmed. I introduce myself to the seller then stand back quietly to take photos of the moment while the seller introduces his gem. He tells us all about the car, it's history, and on and on like only true car aficionados can appreciate.

At long last, I ask the most important question. “Dad, do you want this car?” He's not quite sure how to answer, but clearly, it's a “yes.” I pay the man and then let dad know we have to either drive or trailer his ‘new’ car back to California for shipping. He opts for the former. Obvious to anyone sane, driving an untested 60 year old car 2,000 miles cross country, is ill advised. But whatever, this car was getting back to Maui. Nothing was going to stop that from happening now. My dad tells me he would have bought this car even if the engine was missing.

We return the rental car and set out for a LONG drive back to the California’s SF Bay area to ship out the car to Maui. I don't think I drove the car for the first 1,000 miles of the journey. Hah! We had a handful of various close calls along the way, but overall nothing major. Hundreds of people waved at us along the way. Everyone from the motorcycle gangs to others in high-end BMW's. The car performed amazingly well by any standard. We've dropped it off for shipping and it took a few weeks to get to its new home in Maui, Hawaii.

Remember, we’re all here on earth for just a tiny moment in time. Make it count. Take the time, MAKE the opportunity, and be open to spontaneous adventure with the people you love. No matter what happens, you’ll be happy that you did.

Posted by Jeremiah Grossman at 10:27 AM

What a great story! Thanks for sharing!