Have you been hearing about WhiteHat Sentinel for a while, but never had the opportunity to try out the service for yourself? We'd like to change that and make Sentinel accessible to more people. We've recently announced a new promotion, for those who are interested and qualify, to receive the full customer experience for 30 days -- for FREE. This is way more than just finding vulnerabilities. If you like it, great sign-up! If not, which is extremely rare, you owe nothing. Follow the link below for additional details.

WhiteHat Security's 11th Website Security Statistics Report, presents a statistical picture gleaned from over five years of vulnerability assessment results taken from over 3,000 websites across 400 organizations under WhiteHat Sentinel management. This represents the largest, most complete, and unique dataset of its kind. WhiteHat Security makes this report available specifically for organizations that aim to start or significantly improve their website security programs, prevent breaches, and data loss. 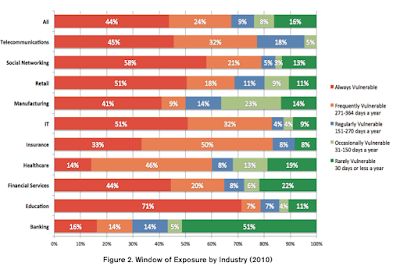 Window of Exposure is an organizational key performance indicator that measures the number of days a website has at least one serious vulnerability over a given period of time.

Download the Full Report...
Posted by Jeremiah Grossman at 11:07 AM No comments:

Robert “RSnake” Hansen, age 34, has passed away, on Facebook

Facebook encourages people to keep up with friends and family through those familiar little website reminders notices. In some cases the person suggested in the reminder has passed away, which would explain the account inactivity, and this might obviously be taken as offensive and emotionally distressing. Facebook recognizes this and offers a process where they allow accounts to be “Memorialized” on the recommendation of a “friend” by filling out the appropriate form.
“When a user passes away, we memorialize their account to protect their privacy. Memorializing an account sets the account privacy so that only confirmed friends can see the profile or locate it in search. The Wall remains, so friends and family can leave posts in remembrance. Memorializing an account also prevents anyone from logging into the account.”
As many readers might recall, a couple months ago Robert “RSnake” Hansen, best known for his contributions to Web security, bid his farewell in a final 1,000th blog post. Since RSnake has departed “the scene,” he is effectively dead in an online sense. As such some felt it only fitting that his Facebook persona follow a similar path and shake off its digital coil. To get RSnake’s page memorialized all that was required was finding a person who shared the same name, who had a recent obituary published somewhere online, lived in roughly the same area, and then fill out the necessary form. Not to long after... 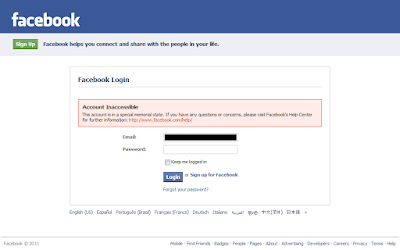 If you are a Facebook friend of RSnake, you may still pay your last respects to him on his wall. Rest assured that while he can no longer reply himself, he is indeed smiling (or LHAO) down on us all from above.

Posted by Jeremiah Grossman at 10:33 AM 3 comments: