Update 11.21.2007: Robert McMillan, Senior Writer, for IDG News was in attendance for the conference. He put this piece of video footage interviewing Samy and highlighting the conference up on PC World. There is also a Swedish version if you prefer. :)

Garrett Gee took by far my most favorite picture of OWASP & WASC AppSec 2007. :) Thats myself, Samy Kamkar (Samy Worm), and Robert "RSnake" Hansen just after Samy's speech. Wayne Huang (Armorize) also took some fantastic snaps and in both rolls you see the faces of many familiar names from our industry. An event to be remembered. 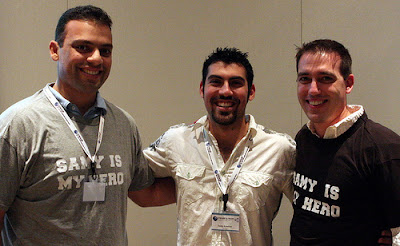 Posted by Jeremiah Grossman at 8:29 AM