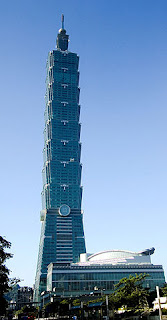 I wasn’t in Taipei, Taiwan long, but I did get a chance to see a little bit of the city. I sampled the cuisine, visited the world’s tallest building (Taipei 101), and attended an infosec conference. The temperature felt similar to Florida, a little on the warm side (81 F) and a tad bit humid. I enjoyed it though as it felt close to home on Maui. The Taiwanese people were extremely nice, and as Matt Huang from Armorize said, “just about everyone in fluent in broken English.” I tested the theory during some late night exploration, since my internal clock was shot, and I found he was mostly right. :) I also got a few copies of my face in Taiwanese newspaper article, no idea what is said, I’m hoping its good stuff. Heh.

Now I normally have little appreciation or taste for art or architecture of any kind. I simply don’t understand it or why many find it so compelling. My wife thinks I’m sort of broken in that way. So came as quite a shock to me that I was completely awe inspired by the Taipei 101 building. 101 floors and 1,670 feet high. I couldn’t take my eyes off it anytime I was around it, it was amazing and a true engineering marvel. I guess the best way to describe my experience is that the size of it was simply confusing as it literally reached into the clouds moving through the needle at the top. To be near it was that it simply occupied the entire field of view. Plus the taking the world’s fastest elevator to the top, which made your ears pop, wasn’t too shabby either.

I really enjoyed the food too and sampled a lot of strange stuff. Jelly pork cubes, sea cucumber, pickled eel, etc. Nothing was off limits, except the stinky fermented tofu as even I have my limits from time to time. Then we also tired the regular stuff like kung pao chicken, several dim sum dishes, and 10 different kinds of soup I can’t recall. Yummy! A lot of the dishes I found fairly similar to the Chinese food we can get here in the bay area.
Posted by Jeremiah Grossman at 3:50 PM